Welcome to the fifth entry in the series Original Scenarios Resurrected, wherein D&D scenarios from the 70s and early 80s are republished with the permission of the authors, usually together with extra contemporaneous material. Today we return to P'teth Tower by Brian K. Asbury. For all entries in the series see here. 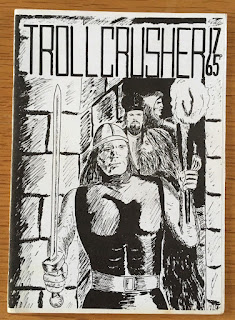 Today we're taking a second look at Brian K. Asbury's solitaire P'teth Tower. In the last post I presented the complete omnibus edition, but P'teth Tower was originally written in three parts, and any presentation of it would not be complete without a reproduction of it in its original form.
Of particular interest is the fact that Part I contains a very early use of ability checks. I've also included some parts of the subzine Aryxia with Part II which lends some context to the adventure.
Part I was originally published in  Trollcrusher 13 (Sept '78), part II in Trollcrusher 17 (June '79), and then there was also the unpublished Part III. I only own a copy of Trollcrusher 17 (that's my copy on the right), thanks go to Guy Fullerton for providing high quality scans of Part I, and to Brian not only for writing it, and allowing it to be shared, but also for hunting down his unpublished manuscript for Part III.
Trollcrusher started out as a sort of semi-APA. Similar to true APAs (such as Alarums & Excursions), contributors would send in their own typed-up contributions as mini-zines with their own titles. Brian's Aryxia was a long standing subzine in Trollcrusher, running for 17½ issues from Trollcrusher 6 in late '77, through several changes of editor, to Trollcrusher 26 in late '83. Each issue of Aryxia contained a variety of snippets, and usually included a list of new monsters - with a promise that the fabled Psionic Ladybird would be describe next issue. In Aryxia VIII, along with a short story, a cartoon, random traps for treasure, a list of magic items (replacing the usual list of monsters) - and the short solitaire P'teth Tower.
The first ever choose-your-own-adventure (Sugarcane Island) and the first ever RPG solitaire (Buffalo Castle) had both only been published in '76 - so solitaires were still a new concept in '78, and in the original part I Brian was finding his feet. In TC14 he suggests that perhaps 4 first level characters should be used as it was too deadly, and when Hartley Patterson complained in TC15 that "Solo dungeons are the opposite of role-playing", Brian counters in TC16 that they "give people who can't get a game of D&D something to do" and that "they are playable immediately and the reader really is in the dark as he/she works through it". Further he writes "I predict that solitaire role-playing scenarios are going to become a much more common feature of the hobby from now on". Little did Brian realise just how popular solitaires (in the form of Fighting Fantasy books) were going to become in a few short years.
One interesting snippet is what Brian has to say about Ability Checks:

When you are told "Save v.s dexterity" or "vs. constituion", this means you must roll that score or less on 3 six-sided dice (ie 3D6). e.g. Brakkit has a constituition of 8; to save vs. constitution he must roll 8 or less on 3D6. (I realise that all this sounds rather obvious, but the relative newcomer to the game, at whom this is aimed, might not know these things.)

The "relative newcomer" would indeed likely not know this - as despite these being a central feature of Dave Arneson's Blackmoor campaign, AFAIK they didn't make it to an official rulebook until B/X in 1981. I don't know where this version of the rule comes from (it's not the same mechanic as Saving Throws in T&T) but clearly Brian expects everyone to know this rule. What I find interesting is the use of 3D6 - where I've been used to it being a D20. In the "Complete P'Teth Tower", which is system agnostic, the intent of this is clarified:

If you are asked to 'save vs. dexterity', this means that you must roll your character's dexterity score or less on the same dice you used to rollit originally.

Whether intentional or not, this generalisation shows that 3D6 makes far more sense than D20 - you're as likely to pass/fail as you were likely to roll that stat in the first place.
Part II is much longer and far more sophisticated, and formed almost the entirity of the short and aptly titled Aryxia X½. At the end Brian promised the third level "some time in the intermediate future". Fast forward 43 years to early 2022 when I was compiling my complete list of 70's D&D scenarios. In the process of researching this I read some quotes from Brian on The Oldhammer Wiki where Brian mentions having written a Part III. This led to some detective work on my part to track down Brian in order to inquire about this unpublished sequel, which in turn led to this series.
So here are the original three parts of P'teth Tower combined into a single pdf, all copyright Brian K Asbury. I've played both versions, and it's far easier to play the omnibus edition from the last blog entry since it contains dungeon map sections which make mapping the dungeon fun - but there is a lot of charm in the style of the original presentation. Enjoy.
Note: You can click on the popout arrow topright to open in a new window with the option to download.
More to follow...
Posted by Joe Nuttall at 14:07