Welcome to the sixth entry in the series Original Scenarios Resurrected: D&D scenarios from the 70s and early 80s republished with the permission of the authors, usually together with extra contemporaneous material. Today we turn to Clearwater Caverns by Andrew Ravenscroft, illustrated by Quentin Manley. For all earlier installments see here. 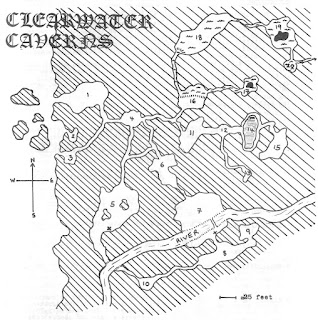 Regular readers of this blog will be familiar with Andy Ravenscroft, in particular his previously featured scenario The Temple of Psaan. Today we jump back a year to September 1979, and Clearwater Caverns. Clearwater Caverns are a natural occuring cave occupied by a tribe of Troglodytes and a variety of nasty cave-dwelling critters. It is a short low-level standalone exploration adventure, and was just one of three adventures featured in Demonsblood #4, but while short it has quite a few interesting features worth pointing out.

The adventure is part of a recurring sub-zine, Andy Ravenscroft's "The Raven Croaks". In the downloadable pdf I've included the entire sub-zine, and since one of the illustrations in the 'zine depicts a monster not given a name or stats until Demonsblood #6, I've included that as well.
Demonsblood, like many early fanzines, contained recurring sub-zines which themselves contained a variety of different articles / sections. Authors of these often included comments on the other sub-zines, and The Raven Croaks #2 starts with such a section - for those interested, Quastor's Handedness Rules and his threat to boil South-East London Wargames Group in Holy Water as payback for their Middle Earth wargaming rules comes from Demonsblood #3 pp15-17, and Kavar's tables for random tables for city shops is from the same issue, pp20-22. There are references also to the previous (inaugural) issue of The Raven Croaks - which contains rules for falling (a perennial subject), and complaints that The Dragon #22 is full of pointless ego-tripping by Gary Gygax (again, a subject still alive today). The archer character class mentioned was published three months later in The Beholder #10 (you had to buy all the fanzines to keep up).
Sub-zines can jump about a lot - so a plug for Frtiz Lieber's Fafhrd and the Grey Mouser books follows - strongly indicating that in the UK at least he was a relatively unknown author even amongst D&D players. I love Quentin's Ent cartoon - I didn't notice at first why the Ent is looking so cross!
With these introductory niceties over we progress to the main course of the sub-zine, with a map of the caverns. The caverns are an extremely early example of a realistic map of caves - in fact, I can't find an earlier example of an RPG scenario that attempts to look like a real cave system (Hellpits of Nightfang was published December '79). Caves maps up until now were in the Gygax style as seen in all his 70's scenarios: wobbly 10' wide corridors joining together large rooms which fill a rectangular sheet of paper. I love cave maps like Andy's, and spent several holiday in the Mendips as a teenager locating cave entrances and exploring the outer chambers armed with a treasured book of local cave maps.
The obvious problem with "realistic" maps of this sort is that they are near impossible for players to map. This adventure predates the DMG (Andy reviews that in the next issue) so you can't get much more old school, but in stark contrast to Gygax and Arneson's efforts to make mapping purposefully difficult, Andy suggests several options to make mapping these caves easy. Infact I actually use one of his three options - the DM sketches the map for the players (I use thin paper so I can see the map underneath to trace it) - which works very well and streamlines that aspect of the game (it was a real hit and no-one's ever suggested reverting) - an idea I thought was modern, but this shows that very little is truly new in RPGs.
Realism is often viewed as a dirty word in RPGs - it gets interpreted as meaning over-complicated rules, or fun-sapping detail; and some interpret it as meaning "true to reality", and hence that it cannot apply in any way to a fantasy world. But I interpret it as "the adventure/rules presented depict a world that you can believe is real" - in particular things that are not explictly changed in the world should behave like our world, and what is changed should be consistent. It is not just the map in this scenario which conforms to this - the spider will only attack a weakened party as it retreats from the caves, the vampire-bats will not be present if it is night-time, characters in plate-mail who fall into the river will drown. The most striking example of this, however, is one that still causes endless arguments to this day; amongst the tribe of Troglodytes there is a baby Trog - ahhh! the text states - and then goes on to give you its combat stats...
Andy says that more parts of this adventure - The Endless Caverns, based on Moorcock's "The Stealer of Souls" - may be published in future. Unfortunately they weren't, and in the intervening 40 years the manuscript was lost. Fortunately one huge sprawling adventure of Andy's, The Tower of Mranor, has survived. It is excellent, and will appear in a future installment in this series.
The scenario finishes with two new magic items and a monster from the scenario. The magic items are located separately but link nicely to each other. I like the conceit - you must own both the sword and shield for the shield to function, but if you ever use the once-only power of the sword then the shield becomes useless. The achilles-heel of the Giant Vampire Bat is once again based upon how bats work in reality. 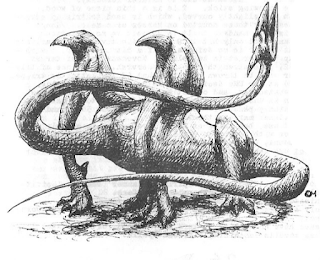 The excellent illustrations throughout are by Andy's friend Quentin Manley. The final image is a strange unwordly creature - "one of QM's warped creations", which the accompanying text states "I'll try to get the stats for next time". The stats did appear, but they're hidden in Demonsblood #6 under the regular monster column "Things that go Bump in the Night". Both of Andy's monsters from there are included at the end of the pdf for completeness.
So, without further ado, here is Clearwater Caverns - to download it click on the arrow in the top right to open in a new window, you can download it from there.
More to follow...
Thanks again to Andy Ravenscroft and Quentin Manley for the adventure, thanks to Guy Fullerton for providing the scan.
Posted by Joe Nuttall at 12:10